The Zoological Garden of Sofia has a history of 128 years which resembles a fairy tale: there is a king, war and …a happy end.

Well, once upon a time, there existed a Kingdom of Bulgaria. Its young ruler, Prince Ferdinand, was well-read and very interested in birds, insects and botany. He would spend a lot of time in the open collecting animals and plants. He discovered and described for science one new butterfly species, as well as gathered valuable specimens for entomological collections. 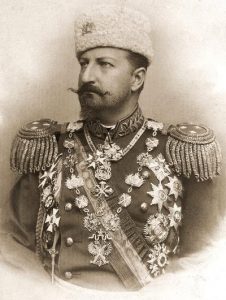 The first present from the nation to its Prince was the magnificent black vulture – the beginning of a whole zoological collection in the park of the Palace of Vrana .

In 1887, with a decree of Prince Ferdinand, a site for a zoo was assigned in the Royal Botanical Garden.

Thus, in 1890, The Royal Zoological Garden was established on the edge of the city. The first animals were also accommodated there: otters, wild goats, deer, lama, swans and cranes. Keepers were appointed, and the supervisor, Ernst Hublein, was called from Coburg especially to take over the job.

He was a sculptor by profession, and a keen taxidermist at the same time, stuffing the zoo animals that died, so laying the foundation of the Royal Prince ’s Natural History Museum, founded in 1889.

Nowadays, this is the National Museum of Natural History, and the tradition to stuff the rarer and more valuable animals from Sofia Zoo still continues.

The animal species in the new zoological garden became more and more varied. The first pair of lions were purchased. There were otters, brown bears, dromedary camels, wapiti deer and Barbary sheep. The bears’ house, the long aviary for pheasants and peacocks were built, as well as the first pool for water fowls, where pink pelicans, black swans, ducks and geese swam. In 1895, the high vault-like aviary for birds of prey was erected. There lived the bearded vultures, griffon vultures and black vultures. The majestic bearded vultures had 13 offspring. This achievement made the Sofia Zoological Garden world famous and unique at the time, because this was the only place where this rare bird was bred in captivity. The Sofia Zoological Garden was considered from then on as one of the world’s serious natural scientific institutions. 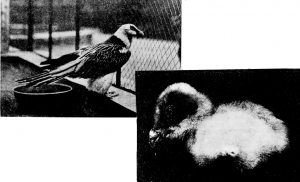 People became more and more interested in the animals in the zoological garden, and there came a time when the doors opened for the citizens. Access was free of charge.

The first director of the zoo was Bernard Kurcius, who accompanied Prince Ferdinand as Chief Royal Hunter. At that time, the number of the specimens in the zoo collection reached an impressive 1 384 specimens from 266 species.

At the beginning of the 20th century, the terrarium was created, in which there were South European snakes and lizards, as well as a young crocodile brought as a present by a lady from Sofia who had bought it at the World Exhibition in Chicago.

In 1912, a male and a female Indian elephant were brought from Hagenbeck Tierpark in Hamburg. They were accommodated in the stalls in Vrana.

In 1929, the elephants were transferred to the Royal Zoological Garden. That was how the tradition of keeping elephants in Sofia Zoo started. Hence the reason for the emblem today – an elephant with a crown.

On 1st July 1911, Adolf Schumann was appointed Chief Inspector of the Zoological Garden. He kept there the rare North American Caroline parrots – today this species is completely extinct. Nowadays, one of the only two stuffed specimens in the world can be seen in the collection of the Museum of Natural Science in Sofia.

During WWI, the Zoological Garden was directly under the Museum of Natural Science and its director, the Academician Ivan Buresh. Thanks to him, the zoo emerged from the war unscathed.

The animals were well cared for. Information about their health status was carefully registered in a special annual log-book kept by the vets in both German and Bulgarian languages. One of the keepers were left on duty in the zoo every night. 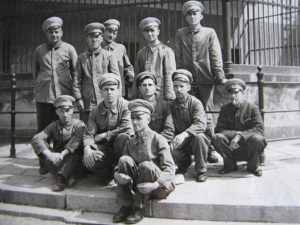 After the death of Bernard Kurcius, who managed the zoo for 40 years, the well-known Bulgarian ornithologist, Pavel Patev, took over as director. He was the first Bulgarian to hold this position.

On 1st September 1939, WWII began. On March the 30th 1944, after the cruel bombing of the capital, and while terrified Sofia citizens were fleeing the city, Pavel Patev and the few remaining keepers walked down the streets of Sofia looking for dead domestic animals. They were searching the ruins for dead horses, oxen and other animals to feed the remaining carnivores.

They had to chase and catch escaped monkeys in the ruins during the bombing. When the meat was not enough, the difficult decision had to be made – which of the herbivores to shoot. These were definitely difficult moments for the director and his staff. Thanks to their dedicated efforts, the zoological garden continued to exist after the war, and was completely restored after quite an effort.

In 1948, the famous Bulgarian entomologist, D-r Krustjiu Tuleshkov, was appointed director of the garden and stayed in office till 1960. 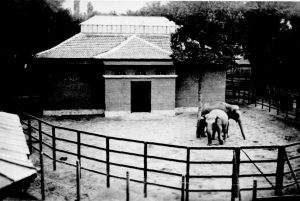 The new elephants from India – young Savitri and Savitan – sailed by ship for a month from Calcutta to Port Said, where they were transferred to a Bulgarian vessel, and on September the 14th reached the harbour of Varna. After that they travelled by train in a special wagon for two days before arriving at the Central Station in Sofia. They found a permanent home in the zoological garden.

13th April 1965 saw a happy and remarkable event in the history of Sofia Zoo: the elephant cow Savitri gave birth to a healthy female elephant weighing 140 kg. The baby was named the capital, Sofia, and became the favourite of both zoo staff and visitors. The elephant calf was very lively and playful, but quite spoilt by the people, and unfortunately did not succeed to learn to suck alone. So, the keepers had first to milk Savitri and then feed the baby calf. Despite this, Sofia grew up healthy – until the sad day in 1968 when a sadistic visitor gave to the calf bread with pins inside. Thus, the first elephant calf born in Sofia Zoo died in terrible pain.

A similar fate lay in wait for the second elephant born in the zoo in 1973, a baby bull elephant named Pashko – who was poisoned by visitors with strychnine. 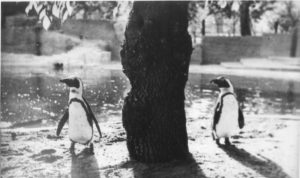 The collection in the Zoological Garden kept increasing, and new species such as penguins, antelopes, zebras were added to it…

Two halls were refurbished to house the aquarium and terrarium, both of which attracted a lot of interest.

The world famous zoologist, Bernhard Klemens Maria Grzimek, was amazed both by the animal collection and the architecture when he visited the old zoo. According to him, part of it was worthy of conservation.

In early 1966, the concept for the new zoo was ready. Its construction was carried out in three stages over a period of fifteen years. The buildings were almost completed by 1983, and the preparatory works for the transfer of the animals began. A great number of special wooden crates, based on a German design, were made to facilitate the transfer of different animals. A special big metal cage was provided for the elephant cow Savitri.

The mass animal transfer was carried out in 1984, and turned out to be a great test for both animals and people.

On 10-th of September 1984 the new Sofia Zoo was officially opened. For the period 1984 – 1985 the Directors of Sofia Zoo were Dr. Stancho Matevski, Adrian Stavraciev, Dr. Nikolay Binev. From 1985 till 2014 the director’s position was occupied by Dr. Ivan Ivanov. 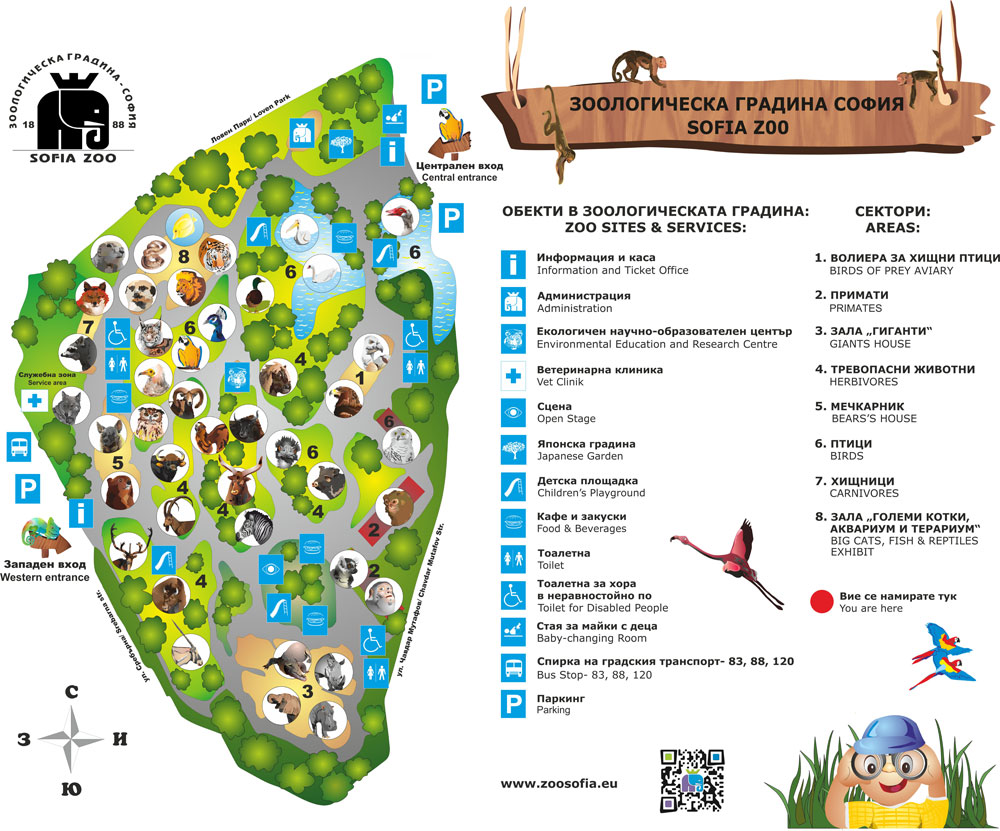